At the corner of Dive Crescent and The Strand in central Tauranga, stand seven majestic poupou (carved figures). They represent the cluster of stars known to Māori as Matariki (or to the Greeks, Pleiades).

Matariki appears in the north-eastern sky in late May/early June, heralding the arrival of the Māori New Year. Traditionally this was a time for festivities following the harvesting of crops when the pātakapātaka (food storehouses) were full. 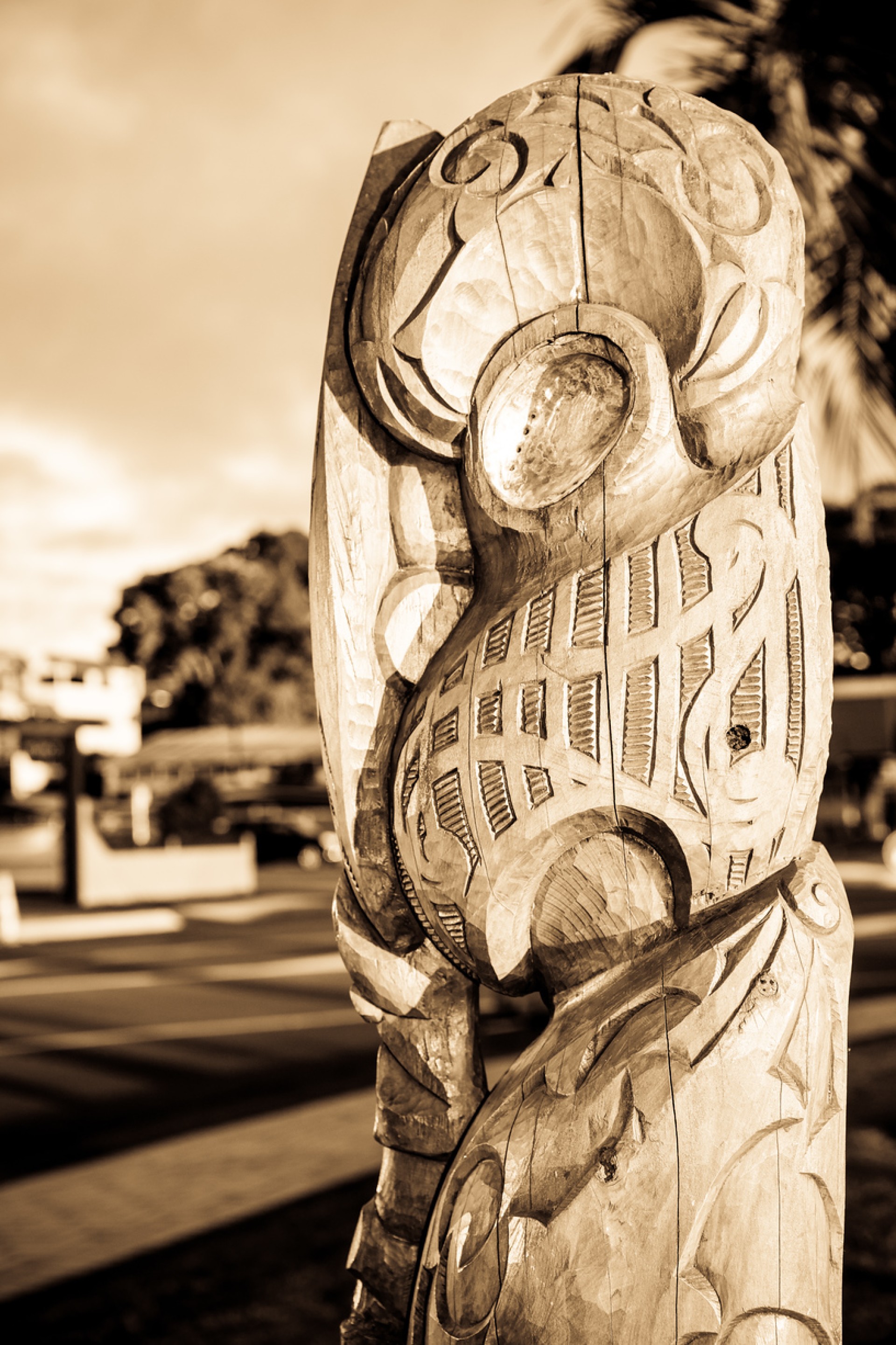 Created by local master carver, James Tapiata, the seven carvings represent the status Matariki holds in the universe; the four seasons; the navigational aspect of Matariki; the travels undertaken by Māori, food and harvesting; water and its healing properties; the last pou pays homage to the links Tauranga Māori have with the Kīngitanga movement.

The first figure, Kahui Matariki, is dressed in a dog skin cloak reflecting the status Matariki holds in the universe. He faces Mauao (Mount Maunganui) as a sign of respect to the mountain. The carving incorporates two other constellations, Tiheru (the Bailer) and Tautoru (Orion).

The second figure is Tupu-ā-Nuku rising from the earth. The koru on top is enveloped by four manaia (stylised figures). The manaia are carved in styles from the South Island, East Coast, Taranaki and Northland, representing Ngā Hau e Whā (the four winds) and the four seasons.

The third figure, Tupu-ā-Rangi, deals with the navigational aspects of Matariki. He holds a navigational instrument in his right hand and extends his left hand out to the horizon.

Waitā, the fourth figure, tells of the travels undertaken by Māori with the hoe (paddle) upright in salute. The figure also provides symbolism to the travels that we each take in our own lives, shown by the unfilled ritorito (fish scale) pattern around the shoulders.

The fifth figure, Waitī, depicts the food-bringing aspect of Matariki. The hands hold kumara (sweet potato) from the garden, and pikopiko (fern fronds) from the forest. Fish are carved on the left leg and a kererū (native wood pigeon) on the right.

The sixth figure is Waipunarangi. The spiral design represents water, its healing properties and that it hails the arrival of Matariki. The three manaia (figures) at the top represent the three iwi (tribes) of Tauranga Moana: Ngāti Ranginui, Ngāi Te Rangi and Ngāti Pūkenga.

Ururangi, the seventh figure, is carved in the Tainui style paying homage to the links Tauranga Māori have with Kīngitanga. The twelve figures represent the Tekaumarua (the Council of Elders), and the main feature represents the Waikato River.

Information gathered with thanks to Debbie McCauley.